We made it until midnight East Coast time, which would be awesome if we didn’t live in the Central time zone. We made the long-distance social rounds via FaceTime and celebrated with friends in Ontario cottage country and upstate NY so maybe we were a little confused and thought we were back in Toronto. We slept in a bit mostly because the 3G Network’s schedule is so screwed up from having humans home for so many consecutive days, but made it up to them by going for a weekend-style super long walk/free tennis ball finding mission.

Once we got back, it was time for plenty of ball playing and rolling in mud (the dogs, not the humans) and for me to putter around in the Mortroski Midcentury Urban Farm. Bruce puttered with the leaf blower in his eternal quest to rid the yard/porch/sidewalk/driveway of acorns.

Today’s puttering resulted in the harvest of the first seeds I planted this fall: beets. I’ve been harvesting them here and there for the past 2 months, but today I realized that the weather did a number on their solar panels and decided that roast beets and young beet greens should be on this week’s salad menu. We love beets and will definitely grow them again.

A couple of things I learned from my 2012 beet growing:

1. Do not sow beet seeds close to each other. They need space or you get teeny tiny beets and lots of greens.

2. They are gorgeous! And make the raised bed look lush and pretty for a long time.

the beginning of the beets after George napped on them

3. Naps don’t hurt beets. When they were first coming up, George thought they’d be awesome for a comfy muddy nap. Next time I will definitely put up a visual barrier (bamboo stakes + string) before he discovers the bed, although they sprang back just fine from his “test”. Probably was the “fence” I installed as soon as I kicked him out.

And since it’s New Year’s Day, here are my 2013 gardening resolutions: 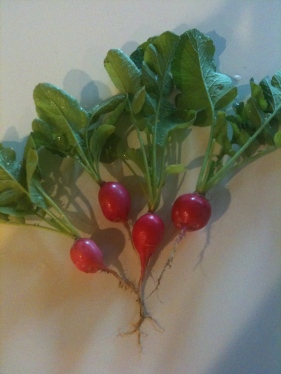 It’s way more exciting than plunking plants in the ground and much cheaper too. I did some seed shopping on the 30th so I’m prepared to get planting. Luckily here in North Texas that means soon since everything needs to be in the ground pretty quick to get a head start on the heat. And I’m taking a seed starting class in a couple of Saturdays so hopefully I’ll have a few old timer secrets up my sleeve.

2. Read more.
I’ve subscribed to a bunch of Texas-focused gardening magazines to help me understand what to do when and am following a bunch of Texas-based garden bloggers and groups. Urban Farm magazine has been helpful. But I also need to read those damn seed packets more carefully. Doh!

3. Write more down.
No surprise, I’ve forgotten a lot of stuff that I didn’t think to write down. Luckily, I received a customizable garden journal as a Christmas gift from a coworker who also loves to garden. I’m hoping it gets me better organized and helps me plan better.

This one shouldn’t be hard. We’re going to expand the urban farm by one more raised bed and one more stock tank (bringing the totals to 4 raised beds and 3 stock tanks). I’d like to plant some fruit — maybe blueberries or raspberries. And of course, we’d like to beautify the urban farm by putting down some stepping stones and pebbles between the various beds and adding some decorations/signage to the fence. We have a gate to add to our fence to improve access to the peach and plum trees. Besides, 30 minutes or so of puttering each workday makes me into a much nicer coworker and a couple of hours on the weekends yields a lower grocery bill—and a farmer tan!

5. Fertilize more.
From all of the reading I’ve been doing, it’s clear to me that one of my biggest mistakes in 2012 was not fertilizing enough. I purchased plenty of organic fertilizing products, but didn’t use them nearly enough. Perhaps if I write more down, I’ll fertilize correctly and have bigger, better yields.

So happy 2013! May it bring us all great things, especially sunny days, enough water to fill the rain barrels and lakes, and delicious harvests.

A little over the shoulder peek at the big black binder I use for all my ceremonies! Looks nice in photos and also keeps the pages under control whether the wedding is in a backyard, on a trail, at a park, at a cottage, or on the dock. Highlights and notes document any changes or places for special emphasis. ❤️✨
Busy spring for this blue book. Looking forward to S & R’s special day tomorrow! ❤️✨
It’s going to be a beautiful ☀️ day for a spring cottage country wedding! ❤️✨ to A&C and their wedding party as they get ready for this afternoon’s ceremony.
Planning a summer 2022 wedding or elopement? I have a few prime Saturdays remaining. But other days of the week are nice too—weekday sunsets in Parry Sound-Muskoka are just as pretty as weekend ones!