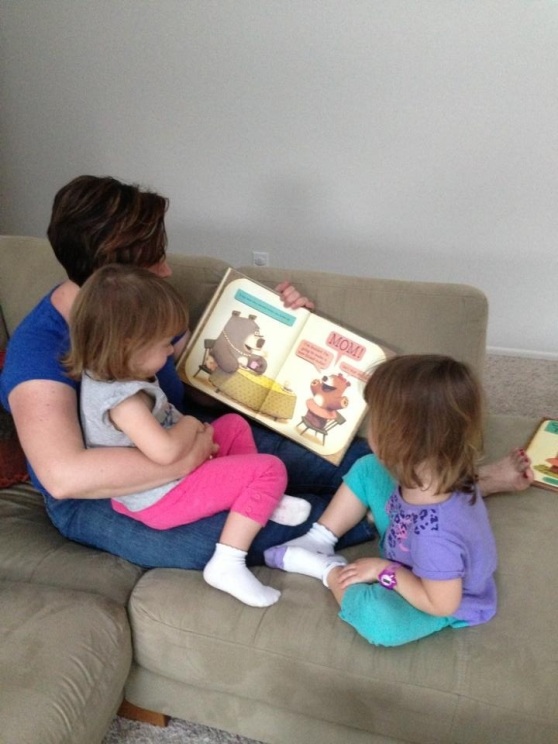 NOTE: due to my own technical difficulties, you may see this post twice. I’m using the iPhone app and I messed up and only posted the photo.

Uncle Bruce and I read the twins 10 books yesterday before dinner. Yes, 10. You parents are probably not surprised at all by the number.

I love reading and always have. I loved hearing books read to me and still do. But I am truly amazed by the twins desire to sit still and just listen. Intently.

My brother says they turn into zombies when they watch their 30 minutes of tv per day. Yesterday that was an episode of Olivia. We had already read two Olivia books so Uncle Bruce was familiar with Olivia, Ian, Julian and Perry. Again, another time when the girls were quiet. Still. Their attention was captured.

This is important because even when they were eating, Eva and Katia were busy! They jumped from toy to toy. We built towers with block, towers with Lego, played store, played Barbie, played with ponies, played dollhouse, ran around outside, picked up seeds from pinecones, petted their dog, drew on the chalkboard, played in a tunnel, did crazy spinning on a sit and spin, danced, sang, and probably did a whole lot more but it’s a blur.

Parents of multiples, you are my heroes. And you’re much better people than I am. I don’t know how you do it. I know you’ll say that you just do, but seriously, you are on a major sleep deprivation experiment accompanied by severe overstimulation.

It was a wonderful day but I was super tired when it was time to sleep. Moms and Dads of three year olds I salute you!