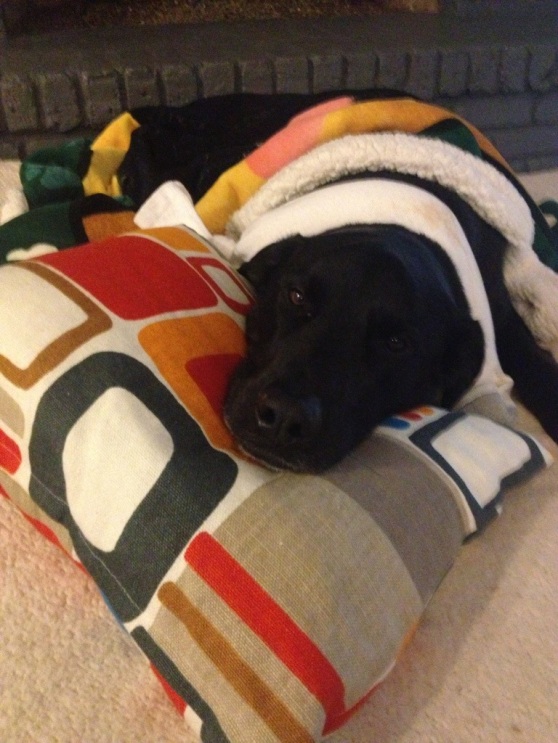 Today I had a big scare. Guinness, the stoic one, was crying in pain. Yelping. Whining. Acting very strange. Crouched down low. Tail tucked. Shaking.

We couldn’t get an appointment at the vet until 3 but I couldn’t leave him alone. Was the shaking a seizure? Was he hurt? Were his organs messed up?

Of course I discovered all this as I was running out the door for work. I had an important 8:30 am meeting.

My coworkers and boss got emails and calls that I was working from home and why. I took my meeting via cell with Guinness’ head resting on my leg. I answered email, wrote copy, solved a few challenges, offered naming suggestions, and who knows what else while sitting on the floor next to him.
He wasn’t getting worse on my watch!

I consulted his pet sitter and a friend who is a vet tech.

And I was ready to drive him to the vet in a flash if things took a bad turn.

We were early for our appointment. Bruce came too in case almost 80 pounds of black lab couldn’t walk from the car to the clinic. He did fine, a few squeaks, but fine.

The vet poked and prodded. Moved and grabbed. Lifted and pinched. We know its definitely not an infection because he didn’t have a fever. But that’s the only definite.

It may be his neck vertebrae as the main issue and it’s causing pain in his entire spine. He’s on rimadyl and novox, rest, no walks, no playing for 3 days for now. If he gets worse overnight, they will do X-rays and reassess tomorrow.

It could also be a nervous system issue given his existing issues. (He has a parasympathetic nervous system issue and cannot void his bladder on his own unless he has 10 mg of phenoxybenzamine a day. Bruce and I also know how to cath him.) Not sure what that could mean.

If would be so much easier if dogs could talk and just say, “my neck is killing me”. Or if people could understand dog language.

George and Godiva know something’s up. They guarded Guinness this morning with me. They freaked out when I put him in the car but let them out to pee. Godiva’s seen sick Guinness at many times (identifying his nervous system issues, heartworm treatment x 2, TPLO surgery) since he moved in and she doesn’t like it at all.

Guinness ate several treats and wagged his tail for the vet and the tech which is always a good sign. He also made sure to make his mark on the clinic’s bushes on the way to the car, another good sign.

Once we got home, I fed him his pills in chunks of cheese while Bruce took a conference call. Then I covered him with a blanket. He’s snoring next to me.

5 thoughts on “So: Guinness scare”