Have to say that after being gone from home for a week, I’m craving digging in the dirt, picking stuff, seeing baby fruits, buds and flowers, watching for new seedlings. As much as I love living out of a suitcase, airports, airline travel, hotels with closed kitchens, famous djs and forestry professors, and tons of meetings, nothing really beats the walking around the urban farm and seeing what’s going on.

the strong and silent type, unless there’s someone in the front yard 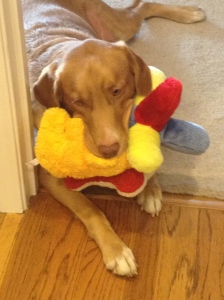 And of course, this:

the handy romantic with a sore back

I’m really looking forward to the canine greeting committee since they’re really not all that fond of FaceTime, texts and cell phones, although I hope I don’t get knocked over. Apparently George has been a little mopey since he is not as used to me being gone as the others in the household. Hopefully they’ll be so happy to see me they’ll decide to forego sleeping on my side of the bed tonight. I could really use a solid eight hours of rest tonight. And some tail wags and snuggles.

And although Bruce’s jar of Kraft Peanut Butter was confiscated at the border (the nice Air Canada worker said she will use the offending “gel” and not throw it away unlike those a-holes in Canada’s version of the TSA were going to), I have a few treats and some nice gifts that I’m sure he’ll like, especially since they’re not available in the U.S.

A nice light snack, anyone?

I think Bruce may have missed me just a little bit, especially this weekend as he moved 5,000 pounds of bamboo into our house to acclimatize. Apparently there’s quite a “honey-do” list waiting for me that involves relocating all of our furniture in the non-bamboo rooms to the two bamboo-ed rooms and the garage. Hopefully work cooperates this week and there no late nights. The rest of the rooms will be bamboo-ed (by the same professional crew who did the living/dining room) on May 4. After the dust settles, we’re done projects for 2013, well, except for finishing the others we’ve already started.

But I digress. While I’m zooming to Dallas from 10,000 feet or more above the earth and we’re not going to be delayed landing (shouldn’t say it, I’ll probably jinx myself), I’m not getting home until way after dark. And while I don’t want to wait, I’d like to see the urban farm for the first time in a week in daylight and not by headlamp.

So my personal Earth Day celebration will have to be postponed a day. I will celebrate the bounty and marvel at a week’s progress. Maybe I’ll pick something. Hopefully the beans and peas are higher up on their trellises and the tomatoes have moved up to the next level of their cages. I’ll inspect the peaches and plums. See if Lisa’s transplants are doing their thing. Learn if okra is taking over the entire farm. Perhaps join Guinness, Godiva, and George for a good roll in the grass.

You better believe that as soon as the Gs are walked and the sun comes up tomorrow morning, the urban farm will be my first stop. I feel a lunch salad that needs to be picked.