Yesterday, I was traveling and I was supposed to arrive back in Dallas at 8:30 pm. Plenty of time to write my post. Or so I thought.

Our flight was delayed over an hour due to weather (storms in the midwest). It was turbulent. My fellow passengers were cranky and inconsiderate to each other. I finally arrived at home around 10:45 pm, much too tired to write anything coherent.

That’s why yesterday I broke my “rule” about writing every day. I could give you all of my excuses: I was traveling with a colleague (my boss) and wanted to talk with her so I couldn’t write in the airport when we were delayed (like I usually do), the plane was too small to have wifi, my laptop battery was dead, I was tired. All of those things were true. And pretty weak excuses.

In the past, none of that would have stopped me. I would have found a way somehow…or stayed up a bit later to write. I would have pushed myself just to do what I was supposed to do. But I just didn’t have it in me. There was nothing to push through, no energy reserves. And unlike some of my blogging pals, I don’t have a stockpile of awesomely entertaining posts waiting in the wings ready to go. (Perhaps now I’ve learned and I’ll create some to keep handy.)

My point of writing this blog was to be daily. I wanted it to be like hearing from a friend, catching up, checking in. Conversational. Last night, I wouldn’t have been a friend you’d want to hear from. Trust me, if you saw my number light up your cell phone last night, you should have hit “ignore”.

I was exhausted. Spent. Tapped out. I dozed off on the plane for a while and I never am able to sleep on the plane. Turbulence woke me up. Hopefully I didn’t snore as I usually do when I’m worn out. Or grind my teeth. I was almost too tired to drive myself home from the airport. I barely managed 30 minutes of niceties with Bruce while petting each of those needy Gs and making sure everyone felt enough love so that they were not jealous that someone else got a belly rub when they only got a ear scratch.

I was out cold as soon as I hit the pillow.

It was hard to wake up and motivate. Even today, I’m not exactly a sparkling conversationalist. And certainly not filled with writing prowess or creativity (a slight problem given my line of work). I’ve been dragging all day and I don’t know when I’ve been this tired after a business trip. It wasn’t even the usual cram-packed meeting-a-rama marathon I usually have. And although it’s Friday afternoon, I’m not thinking about our exciting weekend full of projects, the Urban Farm’s weekend harvesting, going for a walk with the Gs, sitting on the patio relaxing, errands, friends I might see, my to-do list, what’s for dinner. None of that.

I’m thinking about pajamas, a pillow and a solid 8 hours of glorious shut eye.

And so, I’ll conclude this excuse-ridden post with a gratuitous dog photo of the Mortroski Midcentury’s favorite patient: 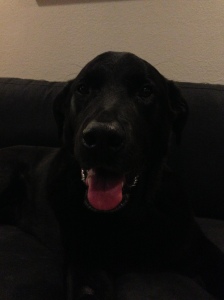 Guinness is feeling much better.            Apparently he chewed on a bone last night.

Hope you have a relaxing weekend. I’m going to do my best to start it well-rested.

8 thoughts on “So: excuses excuses”

Planning underway for your summer 2022 cottage country wedding? Don’t wait to book your officiant! Schedule your ceremony consultation today and we can put a hold on your date. ❤️✨
And like that, we have a new phone number too. Call to set up a no obligation consultation for your ceremony needs.
Rev. Julie and RiteWords Ceremonies are now located in the Parry Sound/Muskoka region of Ontario. We're ready to help you with Cottage Country ceremonies of all kinds. Now booking 2022 weddings with some Fall 2021 weekend dates still available.❤️⁠
If you're thinking about ❤️ Valentine's Day 2022 ❤️ as your wedding day, let me know if you'd like me to save the date to be your officiant during your no-obligation consultation to discuss your plans. ⁠