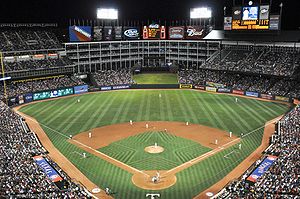 There will be no peach picking or harvesting or composting this evening. Bruce and I are  joining his coworkers for a company event at the Rangers Ballpark, home of such delicacies as a giant hot dog: 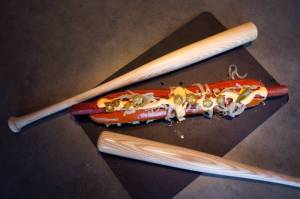 courtesy of the Dallas Morning News

And the team they’re playing? Why none other than:

Caveat: I’m not a huge sports fan. But I do like going to see a baseball game live every now and then. Unlike the dome where the Blue Jays play, Rangers ballpark is open air and styled like an old-fashioned ballpark. It is however, pretty new. And while it’s going to be a hot night (probably 100°F at 5 pm) there’s something magical about hunkering down with a program, a cold beer, a hot dog (something I rarely eat), and a bag of peanuts.

It takes me back to my childhood of course. My dad is to this day a guy who really enjoys a day at the ballpark (we took him to Rangers ballpark last time he visited Texas) even though it is definitely not my mom’s favorite way to spend an afternoon/evening. He knows how to keep score and even if he’s unfamiliar with the particular team, he can size up the players quickly.

But ask me about the inner working of the game and you won’t get much. I read the program because I like the articles about the players and the teams. I like being outside (no surprise there). I like being able to snack on peanuts and throw the shells on the ground, just like I did when I was a kid.

But most of all, I love the people watching. Always have. It’s like being in the airport, except better. Sporting events bring uninhibited yelling. Crazy fashions. Drunken behavior. Rudeness. Kindness. It’s all out there at the same time. And when combined with the game, it’s visually overwhelming. At least for me.

Once or twice a year I love it. But since this is Friday night after a long and busy work week, I’ll probably be ready to head home after two hours or so, sleepy from the heat and overloaded by the visual stimulation. Gotta get up early Saturday. Peaches are calling.

4 thoughts on “So: hotdogs and peanuts”