Love or hate social media, it’s here to stay. To inform us of world events that our local journalists might not be reporting on. To tell us what’s going on in our hometown. To discuss PR gaffs and career suicides. And that’s only this week.

For me, it often brings wonderful surprises on days when things aren’t exactly going perfectly. That’s what happened yesterday.

I didn’t have much time to take breaks during the workday and it was a very long day. But when I checked Facebook quickly after a meeting ended a tiny bit early, I received Surprise #1: A post from my pal and former co-worker Shannon. While eating at Swiss Chalet (a rotisserie chicken restaurant) in Toronto’s Pearson International Airport, Bruce posted that we were there and, I think, took a photo and tagged me. Shannon, who now lives in the Caribbean (lucky girl!) saw it and messaged that she missed the Chalet dipping sauce (a hallmark of the restaurant). When I got back to Dallas, I messaged her and offered to send her a few packets (they’re sold in the supermarket and you just add water and boil to make it).

I’m not sure if she thought I’d really send it, but I did: 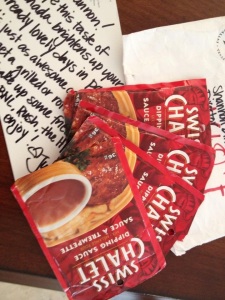 She got the packets and my note yesterday and posted to Facebook the photo and a thank you. Apparently it got there close to her birthday (it’s taken several weeks to get to her little island) so she was doubly thrilled at the timing.

And so was I. As you know I love to write notes to people, even to strangers through More Love Letters. I was so glad to make someone’s day just a little better.

Little did I know that my somewhat stressful and very action-packed long day was about to get AWESOME. A while back, I saw that my “friend,” artist Lisa Loria had posted a photo of a beautiful jewelry box that she had painted and I inquired about it.

First, let me explain “friend.” Lisa and I are Facebook friends. We have never met. We do not live anywhere near each other. But we have tons in common including a love of gardening and making stuff from repurposed items. And we’re both pretty sure that we’d enjoy spending the evening together on a nice patio, wine glass in hand.

The main thing we have in common is a long-time real-life mutual friend (ok, he’s a ex-boyfriend) who we are also Facebook friends with. Our mutual friend is the same guy who introduced me to Bruce. I’ve known him longer than I’ve known Bruce—over 20 years!

Lisa and I were constantly posting pithy comments and liking each other’s zingy retorts to said mutual friend, so I thought she’d be someone I’d love to know. I knew she was an artist, but I didn’t know much more about her. Still she said yes to my request to be Facebook friends.

One day I saw that she posted a photo of a larger painted jewelry box that she had done for herself. I had a similar jewelry box from my childhood, a gift from my parents when I was probably 12 years old. I had kept it all these years for sentimental reasons, not because I actually used it. And I really didn’t like how plain it was. It was ivory and rather bland.

So I asked Lisa if she’d consider painting it for me. She would have carte blanche on the design because I liked her work I had seen on both Facebook and her blog. I said she could fit it in when she had time. I was in no rush to get it back.

She accepted the commission. Whoooohoooo!

I emptied it out—I sorted through it all, kept a few things for my brother’s daughters, “found” a few things I had forgotten about, and donated the rest. And off it went to California, the place where it had originally come from (well, it was probably made in China or somewhere else, but you get what I mean).

Yesterday, at around 7:30 pm CT when I was still at the office, working on a huge project with lots of moving parts, I saw Lisa’s post  and the picture that she tagged me in. The jewelry box was almost complete! Oh happy day! It was so beautiful and I absolutely loved it. 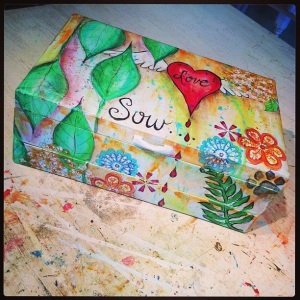 By 8 pm, she had finished it and posted another picture. And by 8:30, her status was a blog post about the jewelry box and our unique friendship created by an ex-boyfriend and Facebook. You can read it here  at http://lisaloria.blogspot.com (she’s also got more pictures of her jewelry boxes if you’d like to see them).

It seems this is a week of retrospection regarding friendship. I’ve read several blog posts about friends they’ve never met, people have talked to me about reconnecting with long lost friends and the new friends they’ve made by participating in social media. My personal rule about being “friends” with people I’ve never met is that if we lived near each other, they’d have to be someone I’d sit down with in a café or bar and have a drink and a conversation. Or eat a meal with.

Bruce and I have some long-time friends that he “met” through a chat room (how ancient) on a singer’s website. He chatted with them for years and got to know people from all over the U.S.

One day, we decided to meet up with a bunch of those friends from Detroit so that we could all hang out, eat dinner and see a show. It was amazing – but really shouldn’t surprise me at all. They were all people that we had something in common with. And through the years there have been more concerts, visits, dinners, roadtrips, and backyard bbqs. Several visited us in Toronto, one friend has even visited us in Texas and another may be coming when the surface of the sun temperatures get cooler, perhaps in October.

Speaking of travel, I’m on the plane right now, so I should wrap up this post and get on with working since it’s about when my day normally starts. But here’s your gratuitous harvest photo from yesterday morning:

Have a great day—maybe you can make a friend’s day today too.

13 thoughts on “So: faraway friends”

And like that, we have a new phone number too. Call to set up a no obligation consultation for your ceremony needs.
Rev. Julie and RiteWords Ceremonies are now located in the Parry Sound/Muskoka region of Ontario. We're ready to help you with Cottage Country ceremonies of all kinds. Now booking 2022 weddings with some Fall 2021 weekend dates still available.❤️⁠
If you're thinking about ❤️ Valentine's Day 2022 ❤️ as your wedding day, let me know if you'd like me to save the date to be your officiant during your no-obligation consultation to discuss your plans. ⁠
🌈 Love is love. I honor, serve, and celebrate all couples with loving respect. 🌈 ⁠