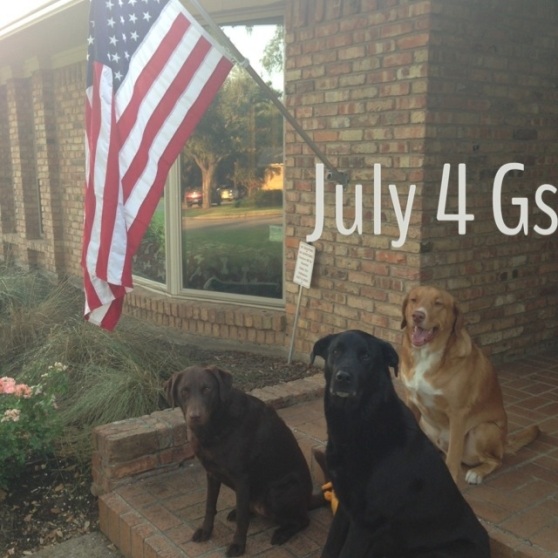 Happy 4th of July! It’s America’s Birthday and the Gs started it out with a photo op. And a nice walk, although the normal Texas temperatures are creeping back up.

Poor Gs. They are so exhausted. It’s hard work having humans around 24-7. Guinness only likes it because walks are longer on week days. Godiva is enjoying more outside time — sleeping in the sun is one of her favorite things. And then there’s George. 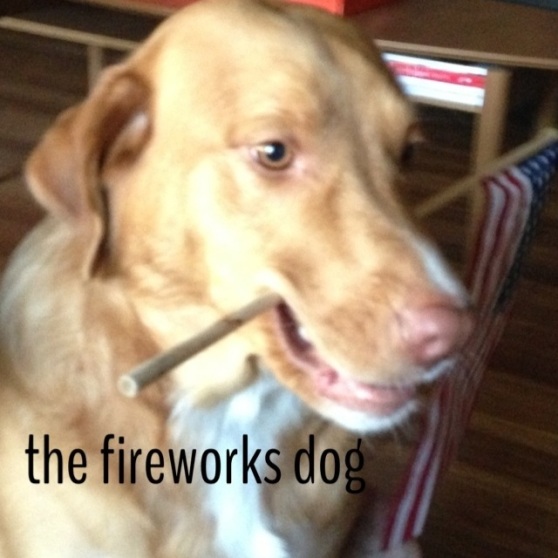 July 4 is the reason we have George. The theory of the rescue group that saved him is fireworks or gunshots (yes, people shoot off guns on July 4 in Texas) caused him to get spooked and try to jump a chain link fence. He caught his leg on it and opened it knee to groin. And so he has been dubbed a fireworks dog.

He is passed out on the cold tile by our front door. George has had a big day of chasing Godiva around the yard, destroying stuffed toys (thanks Tracy!), following his humans around, and snuggling with Guinness. And me apparently, although I don’t recall this photo being taken:

The tv is on, we’re watching Independence Day celebrations from Philadelphia (good music), and none of us can hear fireworks, gunshots or other loud noises like several neighbors’ parties. Replacement windows are great for 1960s houses and not just for energy consumption!

The humans in the house had a good day of organization and getting stuff done. We decided that we’d do a major reorg of our kitchen during this break so we finally tackled it. Looks good and now that we have the cabinets in the dining room, we could put lots of stuff away in a better way.

While I tackled some financial organization, Bruce continued work on the office. We have wifi again (yay!) and the desk area is done:

Tomorrow we’ll be doing the full gray wall paint job in the office including texturing the walls where the wainscoting once was. Wish us luck!

One thought on “So: stay-cation day 7”

It’s going to be a beautiful ☀️ day for a spring cottage country wedding! ❤️✨ to A&C and their wedding party as they get ready for this afternoon’s ceremony.
Planning a summer 2022 wedding or elopement? I have a few prime Saturdays remaining. But other days of the week are nice too—weekday sunsets in Parry Sound-Muskoka are just as pretty as weekend ones!
I ❤️ giving couples exactly what they want for their ceremony. Receiving a compliment like this one makes my day! ❤️✨⁠
❤️the great outdoors almost as much as your beloved? In our beautiful Parry Sound-Muskoka area, we're surrounded by so many excellent outdoor venue options. Whether you're thinking lake, farm, woods, trail, or park, ask Rev. Julie about how you can make your ceremony as memorable as your setting. Now booking for early fall 2022 and beyond. ❤️✨⁠