Today I realized that we had a lot of jalapeños and Anaheim chilis to harvest and I needed to do something with them. So I decided to pickle a pound of peppers. Say that 5 times fast just for fun.

I pulled up a refrigerator pickle recipe my co-worker Lisa recommended (pinned to my pinterest board “can”). I made the recipe last fall with some of our pepper bounty and everyone who tried it, liked it.

Most people around here will eat a jar of pickled peppers so fast that refrigerator ones are the best way to share the bounty.

If you want to try it, check it out here: http://www.sippitysup.com/sippitysups-selection-of-a-pound-of-pickled-peppers/

It’s a delicious pickled pepper in my opinion. And Bruce and I really like them with fish. I put a bit of extra onion in each jar since everyone who tried them remarked that the onion was delicious too. One of my friends said the brine would be good for pickling carrots too.

It’s a quick recipe if you have the ingredients. I picked up the vinegar at the local yuppie/hippie grocery store today. And as you can see from the photo, I was ready to make 5 good sized jars, some to keep, some to give away.

While I was pickling, we got a big surprise: a pop up gully washer (Texan for flash flood) thunderstorm! Yes, more rain.

When I checked the rain barrels today and added the mosquito dunks (organic mosquito prevention disc you add to rain barrels), three of the four were full.

So when the storm happened today, Bruce ran out and put buckets, the plastic liner for our garden wagon (looks like a kid’s wagon except with all terrain tires) and anything else he could find to catch water. He also had to get a broom to push water off the patio since it was coming down so fast and hard and flooding in places.

Power went out several times because of the lightening. Surprisingly, George was not scared at all.

Very odd weather for July in North Texas. When I checked the garden today and harvested okra and peppers, the ground was still saturated from yesterday’s popup storm. Obviously the Malabar spinach likes it:

Peppers turned out very well. Now they need to marinade for about a week before tasting them. Hopefully they’re as good as last fall’s version. 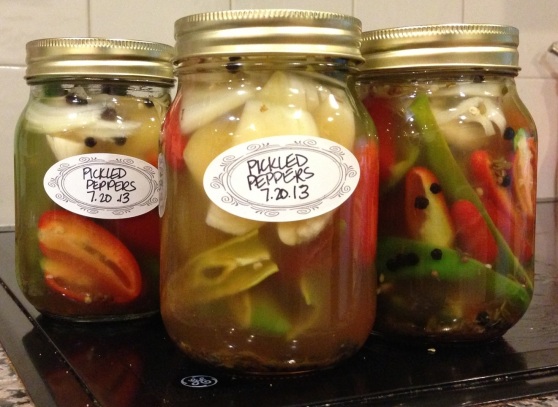