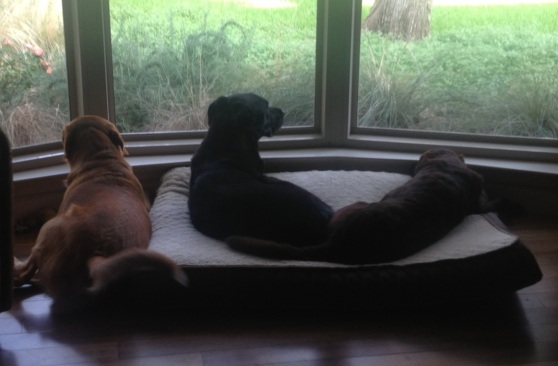 As you can see, the Gs really enjoy each other’s company. Godiva and Guinness are the most closely bonded since they’ve been together since Godiva was 6 months old. She’s 4 now and we don’t know how old Guinness is since he was a stray. He was instrumental in her change from rambunctious puppy to pack leader.

Little did we know how sick he was when we got him. It’s amazing that he had the patience he did with an active and rambunctious puppy. But he did.

George showed up on July 22, 2012. He’s now been around just over 1 year. As you can see, he’s been accepted into the pack, we just need a bigger dog bed in the front window so everyone can be comfortable.

Today’s office! Looking forward to celebrating M&D’s Camp wedding filled with so much love, personality and surprises. They knew that having a Life-cycle Celebrant officiate their wedding meant that it will be as fun, quirky, and entertaining as they want it to be. Definitely a day all their loved ones will remember! ❤️✨
Our part of Ontario is always gorgeous, but fall’s natural decorations make it especially breathtaking for cottage-country weddings and elopements. Even a sweet and simple ceremony becomes more special with such a colourful backdrop, plus everyone stays a lot cooler even on the sunniest day. Looking forward to Fall 2022 weddings! Also now booking Fall 2023 ceremonies. 🍁🍂
Thank you @pinkandwhiteevents! 💐
🐾 for ❤️! I meet the nicest people officiating weddings and sometimes their dogs too! B&E had an early morning casual sweet and simple ceremony with their witnesses, parents, and dogs present prior to the main festivities! It was a very special morning for everyone. ❤️🐾