But I still had more basil so I loaded it back up again.

The great basil dehydration experiment has been a great success. And very enlightening. Never again will I wonder why such a small bottle of a spice or herb costs so much. You saw how much basil I picked on Sunday. It had to be taken off the stems, washed, spun dry, then dehydrated for about 2.5 hours. Basically 1/2 of that became what’s in the tiny bottle in the photo above. That bottle isn’t full so I’m continuing to dehydrate to fill that bottle and hopefully at least one other the same size.

I also brought one of my work pals a huge bouquet of basil: 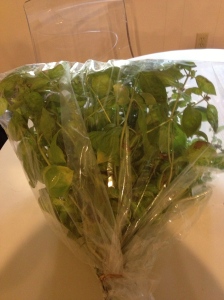 It caused quite a stir—before I knew it, I was dispensing gardening advice since another coworker has been having bad luck with her basil. And by the end of the day, the bouquet recipient’s boss was looking for some basil too. Luckily I have plenty more where that came from so I can bring them each a bag (though not probably as bountiful as the basil bouquet) tomorrow.

The malabar spinach is also growing like crazy so I brought a bag (repurposed from the yuppie hippie grocery store) for another coworker who is working hard to eat right and exercise.  Picking the bagful didn’t really make much of a dent in the vines: 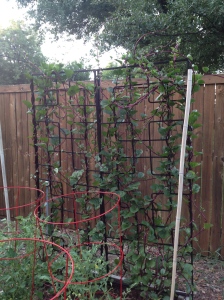 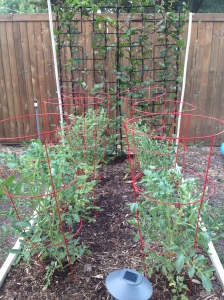 Malabar spinach and the fall tomatoes

There’s lots happening in the garden so I also brought a small bag of okra to the basil bouquet recipient. She’s a fan of okra (I checked since it’s such a polarizing vegetable) and was thrilled to get some. I hope she made something delicious with it:

I’m really loving the okra, but it will be at it’s end fairly soon. So this morning I planted the fall bush beans:

Fall bush beans: chopstick is for making a hole for the two beans that need to get planted in each hole.

I also saw a familiar friend. I haven’t named him yet because I wasn’t sure he’d stick around (or not end up in George’s mouth). Got any suggestions for a name?

Look carefully for my toad pal. He hangs out near one of the raised beds.

And I’m continuing to hit the reset button: Bruce and I went to the gym again tonight for more cardio and abs/planks. Gotta say that I’m feeling it. Well, at least I know that my muscles are remembering what to do.

Have a great night!

It’s going to be a beautiful ☀️ day for a spring cottage country wedding! ❤️✨ to A&C and their wedding party as they get ready for this afternoon’s ceremony.
Planning a summer 2022 wedding or elopement? I have a few prime Saturdays remaining. But other days of the week are nice too—weekday sunsets in Parry Sound-Muskoka are just as pretty as weekend ones!
I ❤️ giving couples exactly what they want for their ceremony. Receiving a compliment like this one makes my day! ❤️✨⁠
❤️the great outdoors almost as much as your beloved? In our beautiful Parry Sound-Muskoka area, we're surrounded by so many excellent outdoor venue options. Whether you're thinking lake, farm, woods, trail, or park, ask Rev. Julie about how you can make your ceremony as memorable as your setting. Now booking for early fall 2022 and beyond. ❤️✨⁠