According to the National Gardening Association, 33 million US households have food gardens at home. To put that into perspective, the US Census Bureau estimated that there were 115,226,802 households in the US in 2012.

Still it’s nice to know that there are other people in the US digging in the dirt, getting filthy, and eating the fruits of their labor. But there needs to be more!

(Don’t worry. I’m not going to get all political. If you’re into that, you already know all about GMOs, the industrial farming complex, and the various conspiracy theories. And if you’re not into it, you might want to do some research on your own, but it’s up to you.)

I’m more interested in getting you to grow stuff just because it tastes better. You know I love the yuppie-hippie grocery store. But I’m sorry, in the great state of Texas, no store’s produce holds a candle to the stuff I’m growing in my little urban farm. Even Bruce agrees. And I like nothing better than grabbing a big bowl and walking over to the raised beds and stock tanks to pick dinner.

And truthfully running my fingers through the dirt probably makes me into a nicer, calmer person. That’s my gardening’s gift to the rest of the planet.

So why not join the revolution? Put a few herbs in a pot and call it an act of defiance. Eat something you’ve grown and say “Viva!”

Gratuitous dog photo of the day: 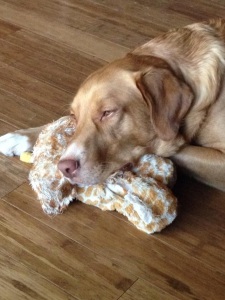 George is exhausted from all the fresh air. Photo by Bruce.