I’m not from around these parts, so plenty of people find it very humorous that I grow okra. Usually these native Texans tell me how much they hate okra, how it’s yucky and slimy. Maybe their moms or grandmas made them eat it, but I never ate it regularly as a kid. My grandmother put it in one of her soups and I always thought it was pretty cool since it looks a bit like a flower, but since I didn’t see my grandparents all that often, it wasn’t on the normal vegetable rotation. Still I always scoured my bowl looking for the “flowers.” She probably thought it was pretty funny that I liked it so much.

Bruce definitely NEVER ate okra until we moved to Texas, at least not knowingly. In Toronto, I don’t remember ever seeing it in the grocery store except in the frozen section. And while it probably grows in California, my mom never bought it.

So here we are in a climate where it’s super hot and dry. Okra likes both of those things as does Malabar spinach, peppers of all kinds, tomatillos, and black eyed peas.Can you tell  I like being a successful gardener (remember my tomato despair)? That’s why we’re eating what grows locally. Just a few okra plants will produce several meals worth per week for two hungry adults until the killing frost comes in November. Nothing is fresher than heading out to the urban farm and picking what’s for dinner right before dinner!

We’ve already had a couple of okra meals in the past two weeks. In North Texas, most people will fry their okra. A few pickle it—I love pickled okra but it’s still too early in the season to do it. You need volume and that won’t really come until August or September. Some people now roast it or even grill okra. All four of those ways are very good, but since we’re of the age where you shouldn’t consume much fried stuff, fried’s not really on our table.

Here’s how we usually eat it: 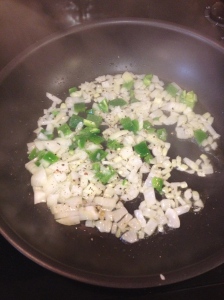 Sauté some chopped onions and a jalapeño or any pepper you have on hand in your favorite olive oil (I use a garlic one from Trader Joe’s).

Chop up some okra into rounds and add to your skillet.

Let the okra start roasting, then add some frozen corn (or fresh if you have it). 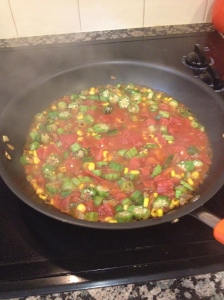 Add a can of diced tomatoes (or fresh if you’re lucky enough to live somewhere where you have nice big tomatoes) and let the whole thing cook down for a few minutes.

Now you could season it all up with hot sauce, salt and pepper and pour it over rice or pasta or quinoa and eat it as is, but we usually throw in some fish and have a one-pot meal. I’m also going to try it with chickpeas (aka garbanzo beans) this summer.

This is thawed frozen cod. I just put it on top and let it cook until done. No flipping necessary. I’ve also used tilapia and other white fish.

The finished product served over a quinoa/rice mixture! See all the little flowers? Add hot sauce if you like — I usually do.

An easy-peasy delicious weeknight dinner that we’ll enjoy many times over the months to come. Let me know if you try it and what special touches you put on it. If I have cilantro, sometimes I add that. Or I use salsa instead of canned tomatoes. The main thing is if you are afraid of slimy okra, do something like this and cook it with something acidic like tomatoes. There’s no sliminess at all, just deliciousness. You can make it with frozen okra too—I freeze our okra whole, then thaw and slice when I’m ready to use it.

Guinness and George are snuggling together a lot more these days. Not sure what has brought this on, but Guinness doesn’t seem to mind at all. Photo by Christine Watson.