The prediction of the first really cold night in North Texas gets everyone all worked up. It’s on the way for tomorrow night supposedly. No, it’s not going to snow. Or even make icy roads. Still, already people are battening down hatches and digging out their warm coats and sweaters—boots made their fashion appearance as soon as the temperatures dipped to 80°F. Brrrr.

While I don’t necessarily mind pulling out the headlamp and the frost cloths to cover everything up once I get home from work in the pitch black that’s 6:30 pm, I realized last year that sometimes such attempts are utterly futile.

You already heard about Seymore the feral tomato plant (actually plants — I found that he created several clones of his wild armed self). He’s gone because no amount of frost cloth would protect his crazy girth (and I’ve already got cute little super red tomatoes happening on my kitchen counter. I guess they like it inside the nice warm kitchen).

The peppers may be ok but they might not be (more about that later). The kale, chard, bok choi, arugula, lettuce, collards, spinach and mustard should all be fine. The herb box close to the kitchen door will be ok since the brick walls keep their planter warm. I’ll pull the little wheeled herb garden closer to some nice warm bricks.

But there was some major picking this past weekend so that all of those plants lives would not be in vain.

First casuality: Malabar spinach. Last year, I foolishly thought covering it would keep it going. It is on a trellis so that was not a good idea and made for a nasty melting, black-leaved mess to clean up. I got a huge metal bowl worth which will last us a couple of weeks in our breakfast green drinks. 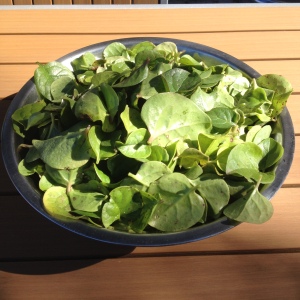 Next was bye-bye basil. There’s a lot that grew from two little plants. So I gave away two gallon ziplocs and have another two washed and ready to be turned into pesto tonight. Just throw it in the food processor with garlic, olive oil, pine nuts and parmesan and then pack it away in the freezer for eating in the cold miserable months. Brings a smile to my face just thinking about those delicious dinners.

Peppers are a little iffy and I’m thinking about going out tonight and picking the biggest ones that remain on the plants. This morning before work I roasted several trays of poblanos and jalapeños for future meals. I’ll peel them tonight and into the freezer they go to brighten up soups, stews, Mexican dishes and more.

I fully intended to plant garlic yesterday, but as I mentioned yesterday, I really don’t know how to rest but I ran out of steam. Maybe tomorrow morning before work when I water everything that’s still alive. Farmer Megan gave me some nice bulbs just waiting to be planted and it will give some bio-diversity to Seymore’s former home (Raised Bed #4). Let’s see how cold it is in the morning.

And even though it’s not Throwback Thursday, here’s a major brown dog throwback for the gratuitous dog photo of the day:

One thought on “Sow: freeze coming”

Planning underway for your summer 2022 cottage country wedding? Don’t wait to book your officiant! Schedule your ceremony consultation today and we can put a hold on your date. ❤️✨
And like that, we have a new phone number too. Call to set up a no obligation consultation for your ceremony needs.
Rev. Julie and RiteWords Ceremonies are now located in the Parry Sound/Muskoka region of Ontario. We're ready to help you with Cottage Country ceremonies of all kinds. Now booking 2022 weddings with some Fall 2021 weekend dates still available.❤️⁠
If you're thinking about ❤️ Valentine's Day 2022 ❤️ as your wedding day, let me know if you'd like me to save the date to be your officiant during your no-obligation consultation to discuss your plans. ⁠