I noticed that I had 666 comments as of today. And today was exactly the kind of day where all of the best laid plans get cast to the wind. All efforts are futile. Obstacles abound. The devil’s in the details.

The weekend’s not to blame, although it was one of ups and downs. Ups since the bamboo floors have gone in and we can start installing trim and putting things back where they go. Weeds are gone. Lots of veggies need to be harvested. Magazines got read, though not enough to make a dent in the pile saved up. Downs because everyone was a bit crabby yesterday since trim work takes time and we really wanted to be done and move on to errands. George is very scared of the air compressor and other loud sounds so he needed lots of attention.

I had very strange dreams last night and woke up a lot. Sleeping was uncomfortable since my hands, wrists and back were sore. And I woke up very grouchy and still tired. But I chugged some caffeine, pushed through, and before work, I did a bunch of laundry, moved more stuff back to where it goes, took care of a bill, washed dishes, harvested some veggies for our lunches, folded the pile of laundry, emptied the dishwasher, tried to get back a feeling of normalcy. 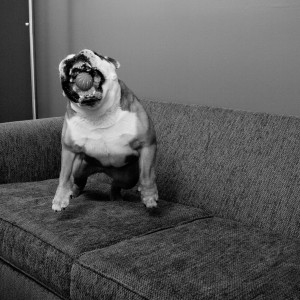 Our bulldog Daisy playing ball, but looking like some kind of alien-beast in this action shot (photo by James Scott)

We’re moving at work too so everywhere things are not where they should be. I’ve been trying to make peace with the chaos—and the irritation of not being able to find something quickly in either place where I spend most of my time. That is, if even know where it is.

While many things went right at work today, one did not. I’m still sitting at my desk, waiting for something that was very simple and straightforward to be completed and shipped out. (just trying to be productive while I sit here an drive everyone crazy with my “are we done yet?” comments). So unfortunately, the DIY plans for tonight turned into Bruce taking care of it himself and hauling more heavy stuff by his lonesome. The Urban Farm will also have to wait until tomorrow morning unless I get the headlamp out, but I think I’ll have other inside stuff to do.

Tomorrow is also Guinness’ tooth extraction. Not sure how George is going to take Guinness’ absence, but we know from past experience that Godiva is a bit of a wreck when Guinness disappears for an extended period of time. Bruce has tried to help her by taking each dog somewhere by themselves quite frequently (they are all big fans of the dry cleaner, Home Depot, and Lowes). But she knows when something’s up. Even George has been wondering why the big boy gets special cheese treats twice a day.

I could use some quality dog snuggling time. Some ball throwing. Even if they end up eating half of my dinner.

So I’m ready for this day to be done. I’m ready to put my head on the pillow and wake up with a clean slate. I’ll go back to being sweet tomorrow, I promise. 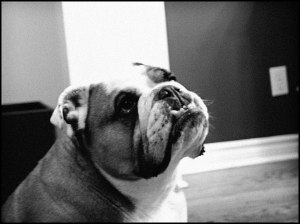 Today was one of those non-stop, wake up and hit the ground running sort of days. It was also a day when I was painfully reminded that we human beings are really nothing more than a bag of water and chemicals. And sometimes the mixture doesn’t work at its optimal level.

It was a day when the body frequently won in any battles with the mind. The heart was on its own terminal verge of tears timeline when it wasn’t feeling like lashing out at the next poor sod to say boo. The mind flitted from thing to thing like George vs toys vs squirrels vs playing with Godiva vs barking vs rolling in muck vs chasing birds.

When I don’t feel well, as hard as I try to fake it ’til I make it, it just doesn’t work for me. People who I think are great made me frustrated. Or worse, angry. A chaotic day, which in my business is 1000% normal, makes me want to tear my hair out. Broken commitments, no matter how innocent, get me to question agendas and values. Even getting cut off in traffic brings out curse words so foul that I shudder to think what the person would think if I said them to their face. Cowardly words used for a reason no less than lack of creativity.

It was an off day.

The only beings who didn’t frustrate me were the 3G Network—they must have sensed a disturbance in the force. They were wonderful. Lots of tail wags and snuggles this morning. Listened well on their walk and didn’t drag me towards the possum and other woodland creatures they could smell hidden in the bushes. Came when they were called to come in. Ate their breakfast well.

And now, it’s the end of the day. Bruce is home from his business trip. The 3G Network is thrilled that everything is back to normal. So am I. And tomorrow will be a better day.

If you're thinking about ❤️ Valentine's Day 2022 ❤️ as your wedding day, let me know if you'd like me to save the date to be your officiant during your no-obligation consultation to discuss your plans. ⁠
🌈 Love is love. I honor, serve, and celebrate all couples with loving respect. 🌈 ⁠
I do! As a Certified Life-Cycle Celebrant, I've undergone extensive training in how to create wedding ceremonies that are just as memorable as the reception. Creative. Personal. Exactly what you want them to be. Your unique, custom ceremony honors and celebrates who you are and what you believe. So you'll love your wedding too!⁠
An anniversary vow renewal ceremony is a lovely way to show the world you'd marry your beloved all over again. I can help with a personalized ceremony created just for the two of you. ⁠