Today’s the day in the U.S. when everyone remembers what happened on 9/11/01.

I know exactly what I was doing (getting ready for work and watching the Today show) and where I was (in our condo in downtown Toronto) when the first plane crashed. I remember going to work in the heart of Toronto’s downtown core not really knowing what was going on.  I remember getting called into a conference room and watching the tv. I remember getting told by our Managing Director to go back home, not realizing at the time that he hadn’t been able to reach anyone in our agency’s NYC headquarters.  Once I got home, I remember Bruce and I pulling our blinds shut and watching news channels all day with our bulldog Daisy snoozing on the sofa, not really knowing what was going on. I had friends and family in D.C. and PA. I had friends in NYC. I remember planes getting rerouted to various Canadian cities and people taking the frightened and passport-less Americans into their homes, giving them their bedrooms and making them part of the family without knowing when they’d be able to leave. I remember the chaos.

No one was prepared for it. How could they be?

Well, friends, one of the themes for 2013 for the Mortroski Mid-century is to be prepared. We’ve optimized and checked systems. We’ve gotten important paperwork in order for both ourselves and the 4Gs. Bruce and I attended a Pet First Aid class and now know how to do CPR on the dogs, muzzle them in an emergency and do some basic first aid.

And I’ve been building a dog first aid kit and a people first aid kit. To get it done in what I thought would be the most efficient manner, I ordered everything online from Amazon. Well, the mailroom at my office must be wondering what’s coming in all the boxes.  Amazon (and their various suppliers) have been shipping everything in bits and pieces, despite my checking of the “ship in as few boxes as possible” box.

Still, by the end of the week, I will have a very comprehensive kit for the Gs, a smaller kit to bring to work, and plenty of materials to expand our human first aid kits. Then I need to work on the emergency supplies: food, water, tools, etc.

It’s a wonder I’ve never put these emergency kits together before. Before adulthood, I lived through tornadoes in Indiana, hurricanes in Georgia, and earthquakes in California (including the big World Series earthquake in the late ’80s where the Bay Bridge and highways fell down). I remember going to the hurricane shelter and I remember being without power for a week. I remember staying with my friend Elaine as we watched San Francisco burn from across the bay in Berkeley, not knowing whether or not her dad and stepmom who lived in the Marina neighborhood were ok. She wouldn’t hear from them for full day, but luckily they were ok.

In Toronto, I should have had an emergency kit for the big eastern 1/2 of North America power grid blackout in August 2003. Instead, our bulldog Daisy and I went for a walk (Bruce was on a business trip in Quebec City and would find himself being driven back to Toronto in a day or so since it was lights out for several days). We visited with our neighbors who were all sitting outside on their stoops, drinking wine, beer and cocktails and chatting. We made our way to our friend Jeanette’s townhouse. 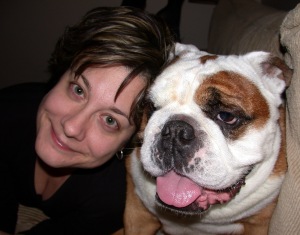 Glamorous Jeanette was (and still is) the hostess with the most-ess. Not only did she have a fridge full of food that she was turning into an amazing meal cooked on her BBQ for a full house of friends and neighbors, she had more wine, beer and candles than anyone I knew. It was an amazing and fun night on her back deck—a beautiful party under the stars with a huge group of fascinating people. If I remember correctly, she sent us home with plates of food, for “Daisy’s breakfast”, she said. (Her big black mutt Wade was Daisy’s pal and it was a contest to see who was the most spoiled canine.)

Daisy and I hung out with Jeanette and Wade until 1 am, going home after realizing like everyone else that the power wasn’t coming back on any time soon. Since it was August and still hot and humid outside, we slept on the sofa in our basement that night since it was the coolest place in our townhouse. And since it was so dark, we slept way past when we should have woken up.

But I didn’t make an emergency kit afterwards. Or gather up food and bottled water. Life (ok, work) got in the way and it went to the bottom of the to do list and finally just fell right off.

Maybe it’s Texas, the land of extreme weather, flash floods, tornados, lightening that burns down houses. Maybe it’s just age and realizing that with each passing year, time’s slipping away. So I’m getting prepared for the unknown.

It may not be enough. But at least I’ll have something. So if we need to help the neighbors, we can. If we need to bandage up neighborhood dogs, cats and even chickens, we can.

So on this 9/11 anniversary, I’m taking action. I’m planning ahead. Don’t worry, I’m making sure there’s wine in the kit. And candles for ambiance. Of course, there will be dogs.

And because around here, dogs are everywhere, here’s a photo from last night:

“So, where will the 2-leggeds sleep tonight, George?”
“I don’t know, Guinness. Maybe they could both fit on the extra dog bed that Gidget and Godiva aren’t using.”

I noticed that I had 666 comments as of today. And today was exactly the kind of day where all of the best laid plans get cast to the wind. All efforts are futile. Obstacles abound. The devil’s in the details.

The weekend’s not to blame, although it was one of ups and downs. Ups since the bamboo floors have gone in and we can start installing trim and putting things back where they go. Weeds are gone. Lots of veggies need to be harvested. Magazines got read, though not enough to make a dent in the pile saved up. Downs because everyone was a bit crabby yesterday since trim work takes time and we really wanted to be done and move on to errands. George is very scared of the air compressor and other loud sounds so he needed lots of attention.

I had very strange dreams last night and woke up a lot. Sleeping was uncomfortable since my hands, wrists and back were sore. And I woke up very grouchy and still tired. But I chugged some caffeine, pushed through, and before work, I did a bunch of laundry, moved more stuff back to where it goes, took care of a bill, washed dishes, harvested some veggies for our lunches, folded the pile of laundry, emptied the dishwasher, tried to get back a feeling of normalcy.

Our bulldog Daisy playing ball, but looking like some kind of alien-beast in this action shot (photo by James Scott)

We’re moving at work too so everywhere things are not where they should be. I’ve been trying to make peace with the chaos—and the irritation of not being able to find something quickly in either place where I spend most of my time. That is, if even know where it is.

While many things went right at work today, one did not. I’m still sitting at my desk, waiting for something that was very simple and straightforward to be completed and shipped out. (just trying to be productive while I sit here an drive everyone crazy with my “are we done yet?” comments). So unfortunately, the DIY plans for tonight turned into Bruce taking care of it himself and hauling more heavy stuff by his lonesome. The Urban Farm will also have to wait until tomorrow morning unless I get the headlamp out, but I think I’ll have other inside stuff to do.

Tomorrow is also Guinness’ tooth extraction. Not sure how George is going to take Guinness’ absence, but we know from past experience that Godiva is a bit of a wreck when Guinness disappears for an extended period of time. Bruce has tried to help her by taking each dog somewhere by themselves quite frequently (they are all big fans of the dry cleaner, Home Depot, and Lowes). But she knows when something’s up. Even George has been wondering why the big boy gets special cheese treats twice a day.

I could use some quality dog snuggling time. Some ball throwing. Even if they end up eating half of my dinner.

So I’m ready for this day to be done. I’m ready to put my head on the pillow and wake up with a clean slate. I’ll go back to being sweet tomorrow, I promise.