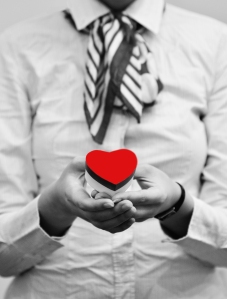 In the Mortroski Midcentury, we’re not big fans of today’s Hallmark holiday. As I mentioned yesterday, it’s cards only between us.

That doesn’t mean we don’t share the love with a whole lot of other people.

For me, it’s not a party without cupcakes. And if you check out my LinkedIn profile, my coworkers expect me to show up with them. So holidays mean cupcake baking the night before the “party” (and when I say party, realize that it’s a bunch of art directors and writers with beers and snacks, nothing fancy). 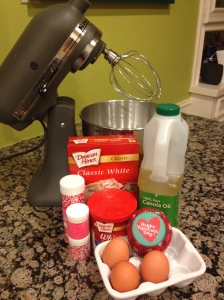 I spent part of last evening with Duncan and some friends…

(my other secret weapon: a cupcake portioner so I get the 24 cupcakes out of the batter that I need)

Bruce was also busy last night. Because of our other projects around the house, we didn’t get the wine bag we needed to get done started or finished last weekend. So Bruce decided to take on that task and it wasn’t very easy (Bravo, Bruce!): 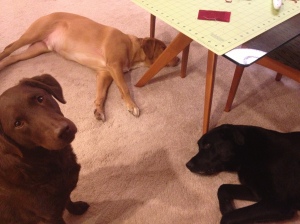 Cursing at Morty and the fabric 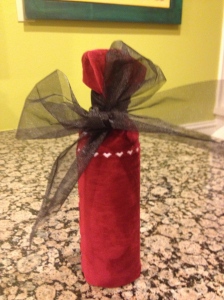 the final product — a bag of wine from the 3G Network for their pal Tracy (isn’t it pretty?)

Meanwhile, I got the cupcakes out of the oven so they could cool off.

And iced them up, knowing they would disappear in mere moments.

Today’s creative department Anti V-D Gathering was a smashing success. However, unlike some parties we have had or attended, no cupcakes were thrown or actually smashed. Most were in fact eaten as everyone complained about the stupid Hallmark holiday and all the chocolate around the office that was causing them to break their New Year’s resolutions and/or Lenten sacrifices.

After all of that frivolity, what’s on the schedule for tonight? An elegant dinner of leftover chili with a side of festive home projects! The ordered online curtain rod arrived today so perhaps we will have a Valentine’s Day curtain rod hanging! Or maybe a Valentine’s Day fireplace caulking! Yeeeeeeehaaaaawwwww!

In the Mortroski Midcentury, we do Hallmark holidays right! 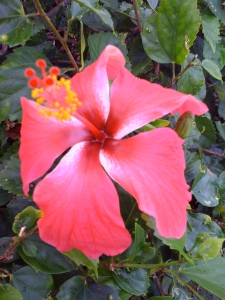 I appreciate that you are reading my blog. There’s lots to read on WordPress and elsewhere on the Internet, so thank you for stopping here.

I really enjoy reading your comments. I enjoy reading your blogs too, although sometimes I can’t think of a witty comment or much more than a sincere “thanks for sharing”. Or a like. I’m learning a lot and I thank you for your wonderful writing.

As I covered the raised beds tonight in the Urban Farm (it’s going to be below 40° F tonight), I thought how nice it is that you’re interested enough in my adventures in gardening to  comment on the photos and words that I’m putting out there. And offer suggestions, comments and kudos.

I think it’s great you’re encouraging my evenings with Morty (the sewing machine) and that you think wine bags are a step in the right direction to develop some real sewing skills.

So thank you. I appreciate you!